Cure Ourselves and Our Healthcare System

OK, the gloves are coming off for this MAJOR issue facing you, me and the future of America.

But first, I am as guilty as anyone on messing up, abusing, not thinking through the consequences, having little will power, making up excuses, failing to do the “hard” work, and then putting off change until “next week.”  Well, guess what week this is?  It’s the week I do better and stop making up excuses.  I will change and I take ownership of my own failures and short comings.  You see, I don’t eat very well and I need to lose some weight.  Oh, and I just found out that my cholesterol is a little too high.  And guess what, IT’S ALL MY FAULT. Not the food companies, not the restaurants, not the evil marketing campaigns.  No one is forcing me to buy a pizza.  No one is forcing me to eat a cheeseburger.  No one is forcing me to watch the fruit I buy sit in my refrigerator and spoil.

You know why I’m going to change and be better? Here it goes, are you ready?…it’s not going to be pretty and you are probably going to get mad. But it’s the truth so deal with it. 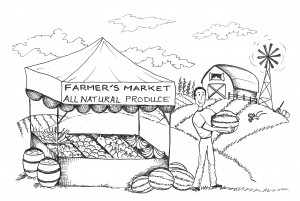 “If you choose to eat unhealthy foods that lead to any sort of disease or disability, one that costs the government or insurance company’s money, then you are being unpatriotic with your decisions.  The United States literally does not have the money to take care of a physically sick culture today and ESPECIALLY in the future through Medicare and Medicaid and other cost, direct and indirect, like loss of productivity and absenteeism. Obesity, which is often a direct result of poor eating habits and lack of physical exercise, will wreak more havoc on our nation with lives lost and money spent than the threat and actual damages from terrorism in America.”

Crickets, Crickets,… are you still there? Yep, I just said that.  The numbers don’t lie and PLEASE, PLEASE, PLEASE try to prove me wrong.  If you can, I will give you a free T-Shirt and post your picture on the website. Here are the stat’s and the sources:

Our unhealthy lifestyle, primarily due to us eating all sorts of things that our bodies were not designed to process has wreaked havoc on ourselves but also our healthcare system.  I am sure that there is some study somewhere that says it’s not the food it’s the metabolism of someone, or the “XYZ”, or the “ABC” issue.  Sure, everyone knows of an “outlier”….like the guy that has eaten 25,000 Big Mac’s and seems to be doing great.  He is lucky….for now.  But guess what?  Most of us can’t pull off that daring feat.  I wish I could, I really like Big Mac’s.  They are tasty.

But my book and my stance is about what is the “most” probable outcome of these bad behaviors.  The most probably outcome if I don’t eat better, lose some weight, get educated about what I am putting into my body, is that I will most likely develop some sort of heart disease, diabetes, cancer or another aliment and suffer and die.  All the while spending $100,000’s dollars of medical expenses which I don’t have and I am pretty sure my insurance company or the US government would rather not spend.

So I can do better.  I will do better.  I must do better if I want to live a full and happy life.  My country needs me and I need to be a better steward of the blessings I have been given by being an American.

Here is what I am going to do:

1)      Over the past few months I was introduced to a movie called “Fat, Sick and Nearly Dead.”  It’s on Netflix so watch it.  It is also available for purchase on Amazon.com at:

Recently, I also had the unique opportunity to meet the star of the movie, Joe Cross, and talk to him about his movie, movement and the positive effects of natural juice. Therefore, starting on February 1, 2012, I will be joining Joe Cross for a 10 day “Reboot” to get my system cleaned out and ready for more healthy eating.  You can learn more at www.JointheReboot.com

2)      THEN, after I am done with the Reboot I am going to begin making a lifestyle change to eat more natural foods and lean meats.  One of my best friends in the world, Charles Mayfield and his lovely wife Julie, are super big fans of the “Paleo Way.”  They even wrote a great cookbook that utilizes the Paleo Way of eating. You can Google it to learn more or visit their website at http://paleocomfortfoods.com/  This Paleo thing just makes sense to me.  It is really easy for me to understand by just asking this one simple question: “Could I have eaten (or created) this dish with food that was available 10,000 years ago?”  There are some other stipulations but this is the general idea. The human race has been around a long time and, up until recently, everything we ate was pretty much natural….there was no other choice.  Today, however, we have laced food with all sorts of chemicals and fillers that aren’t natural and are creating all sorts of health problems. I am so committed to learning more about Paleo that I am going to a big conference they are having in Austin in March.  I will report back with more knowledge.

Thus, in summary, I think with the combination of more fresh made juices (thank you Joe Cross) and the Paleo Way of eating (thank you Charles and Julie) I can regain and restore my health.  Of course, I need to throw in some exercise but first things first.  Let me make sure I am giving my body the right fuel.

Eating Paleo and more natural CAN Fix America.  It is a matter not only of our personal health but also the health and prosperity of America. It is simply the right thing to do.

# 20: I Can reduce my risk of cancer, stroke, diabetes and obesity by eating less processed food and more fruits, vegetables and lean meats.