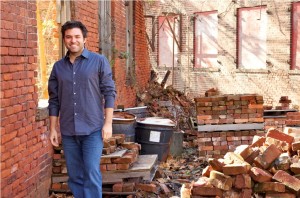 Hi, my name is David Duley. I spent the first 18 years of my life in the city now known as the most violent place to live in America: Flint, Michigan. Flint has seen better days. In fact, at one point, not too terribly long ago, it was the place in America to thrive, work hard and earn a great middle class life.

Oh yeah … so was America.

Thus, the reason you are reading this website (and hopefully purchasing the book) is because I am kind of freaking out (maybe you are too). I feel like I am watching a “super-sized” Flint happen on a national scale. But this time, I am in the position to do something about it. Flint, and much of America’s downturn, has been the result of bad corporate, labor and political decisions, I’ll give you that. But this book suggests that, instead of blaming these institutions for our decline while at the same time looking to them to help us get out of this mess (which is pure insanity), it is really up to you to make it happen. It’s not “we can” make it happen. It is the conscious decision of that organ that resides between your ears (your brain), linked to passion (your heart), and your determination (your body) to get up, change what you’re doing and fix America. You must believe that “I Can Fix America” and live your life according to that conviction.

This book has 52 ideas to get you started. Find a few that make sense to you and make it happen. Try five, try them all, it doesn’t matter to me how many -- just do something that makes you and our country better. Yes, it will take work. As we all know, the most valuable things in life are often tough. But I think America is worth fighting for so I’m going to change. I am going to be a better citizen and steward of this great country and do more.

I Can Fix America

David Duley, originally from Flint Michigan, has called Atlanta his home since arriving to attend school at Oxford College of Emory University and Emory University’s Goizueta School of Business. David’s first entrepreneurial adventure started during the dot.com boom when he tossed his hat in the ring by starting The Handyman Network, Inc., a unique service that would allow customers to find qualified contractors for their home improvement projects with just the click of the mouse. While at The Handyman Network, David invented "Handyman In a Can™," the first way home improvement retailers could sell installation services as a product right off their store shelves.

After The Handyman Network, David began consulting for small and medium size corporations. While technology sales slipped globally, David helped develop a new sales platform for a local start up company that increased sales by over 100%. In 2003, David started Triad Ventures, LLC, a real estate investment firm specializing in the investment of bank and government owned assets.

On July 1, 2009 PEARL was sold to Werner Ladders to bring our permanent escape ladder to the masses.  Werner Ladders (http://us.wernerco.com/en/ ) is the world’s largest ladder company with roughly 75% market share in the US with growing markets in the European Union, Australia and South America.  Until their partnership with PEARL, Werner ladders had never had an escape ladder product.  By working with PEARL Protected, Werner launched the Werner Fire Escape ladder system with Home Depot, Lowes, and various other big box retailers.

David is also co-owner of a successful restaurant in midtown Atlanta called The Nook, on Piedmont Park.  The Nook’s patio was ranked #2 by Creative Loafing magazine Atlanta.  In addition to a nice patio, The Nook has brought to market many innovative dishes that have reached acclaim such at Totchos™ (tater tot nachos), the “Bloody Best” (named top 10 Best Bloody Mary in America)  and the various “ Stuffed Burgers”, that have been winners of the 2010, 2011 and 2012 Atlanta battle of the burgers.

David’s latest project is I Can Media, LLC.  In 2012, the published book titled “I Can Fix America: 52 common sense ways YOU can make the United States great again” arrived online and in bookstores across America.  This book and subsequent website has helped empower Americans with simple tool and ideas that can help restore America for generations to come. Since the release of the book, David has appeared on numerous national talk radio and TV shows. Additionally, he has teamed up with New York Times bestselling author, Robb Wolf, to create The Controversial Truth Podcast available on iTunes and Stitcher.

In 2012, David was named by the Atlanta Business Chronicle as one of the “40 under 40” in business and community leadership. Currently, David serves on the Oxford College of Emory University Board of Counselors where he is Vice-Chairman of the Scholarship Committee. He was also appointed by City Council to serve on the Board of Ethics for the City of East Point, GA in from 2009-2012 and previously served of the Board of Directors for Jerusalem House in Atlanta Georgia (www.jerusalemhouse.org ) which houses over 50% of permanent housing for the homeless living with HIV/AIDS in the Atlanta metropolitan area.