#8: I Can buy more goods and services that are made in America, from companies that are headquartered in America, if I truly want more American jobs created.

As I mentioned in my opening remarks for the week (that sounds very official), I wrote that this week’s “I Can” statement was A BIG ONE.  Yep, it is and always will be.

I’ll also come clean with ya, I’ve been working on this one for a few months.  You see, even though I am dedicating a whole week for EACH of the 52 ideas in the book, some of the ideas are actually lifestyle choices.  They are behaviors that we can change over time and stick with throughout our lives.  Just like you cannot get healthy by eating well and exercising one week, we cannot simply get American jobs back into the economy by only buying American made goods one week a year.  That’s just crazy talk. It has to become a way of life, a constant commitment, and a disciplined thought process that ANYTIME you decide to purchase an item you need to ask yourself, every time, can I buy a similar item that is made in America?

I get it, sometimes you cannot find an item that is Made in America.  For example, if you want a flat screen TV you cannot purchase one that is made in America.  However, when you choose to buy a car you have plenty of options.  It’s interesting though, how many of us immediately try to justify any foreign purchase that we have made (and might make in the future.)  I was talking to a friend of mine who is a HUGE fan of a foreign made car and plans on spending a good chunk of change buying a new one shortly.  I asked him if he has ever considered buying an American made car?  He said simply that no American made car could take corners like the car he was thinking about buying.  I challenged his assumption by asking if he considered the new Cadillac CTS-V or the Corvette as solutions to his cornering desire.  He admitted that he did not consider those well built, American made cars but that he would look into it.

Here is the deal: America is suffering.  There are WAY too many people out of work and without the prospect for a job.  We spend A LOT of money, as Americans, on things we really don’t need often made in countries that aren’t always aligned with our best interests.  Therefore, let’s do better.  America and Americans need everyone to do better. Imagine if we just committed to giving “Made in America” products a try.  Sure, it might cost a little more.  But I would argue that if we cut down on many of the “trinkets and trash” that we buy every now and again (a dollar here, two dollars there) then maybe we can use that extra money to offset a little higher cost of an American made item.  Then, if enough people start buying American the laws of economics will begin to work and many of the prices will drop.  It will be a win-win experience.

As mentioned in my book, I’ve not always lived according to these principles.  I, myself, used many ridiculous excuses on why I needed to buy a foreign made product when, in fact, an American made product would have suited my needs just fine.  Looking back, I guess I was too self-absorbed with what I wanted rather than think about what my country and fellow Americans needed.  I didn’t do my part to Fix America.

But I am happy to report that I am doing better….and I know you can too! 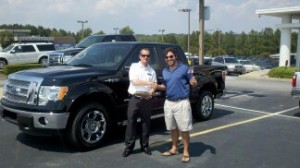 I got rid of the foreign car and bought a new Ford F-150 (with Ecoboost).  I love this truck.  Sure, I know what you are thinking, why didn’t I buy a GM car since I was born and raised in Flint Michigan?  It is simply because as a business person I know how hard it is to make TOUGH choices, especially if that means the company might fail.  When Ford decided to stand on its own two feet and not take any bailout money from the government they earned my respect and business.  They made a tough, tough call that could have turned out really bad for them.  But they stuck to simple, sustainable principles in the face of a huge crisis and, in my opinion, came out the other side victorious.  These are the type of tough decisions that I am talking about which needs to be made not only by companies both large and small BUT by each one of us.  We need to learn to stand on our own, without the help of a dysfunctional government, to truly be free and make America all she can be now and into the future.

Join me in fixing America by buying as many things as you can that are made in America.

Here are a few American based companies that I buy goods from:

Clothing:  Todd Shelton is the reason I look so stylish..;-)… www.ToddShelton.com

AND, a friend of mine from Michigan sent me this info THIS WEEK.  Soon we WILL be able to buy TV’s made in America…and from my home state of Michigan.  This is awesome:

Also, ABC News did a big feature about buying American.  Here is another resource to help you: